If you have never been on a true “hunt” before, try it at least once in your lifetime. Buying your steaks at the grocery store is easy. Hunting is truly an enlightening experience to see how man stalked and killed his meals before giving up his wandering, nomadic lifestyle to become the sedentary couch-potato and desk-dweller of today. Sure, hunters use modern technology, firearms and compound bows, to increase their effectiveness in the field, along with 4x4 vehicles like our ROXOR to cover large ranges… but that doesn’t take away from the thrill of the hunt. 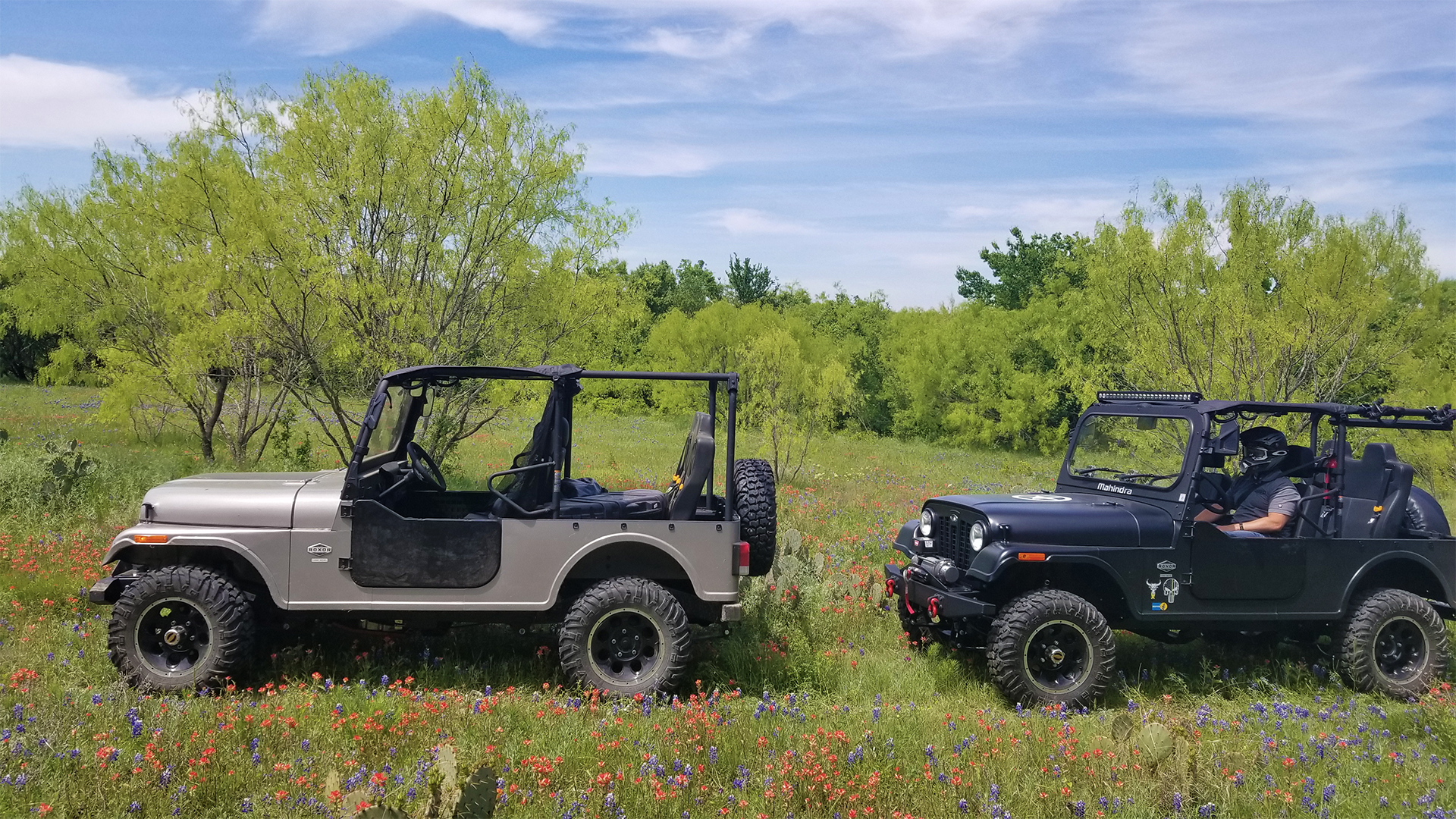 ROXOR sent us to Texas on a hog hunt, armed with a bow and a rifle, to see how it all really works. Due to a massive population explosion throughout the state, feral hogs have become real pests. Hernando deSoto, a post-Columbus Spanish explorer, brought over these wild animals in the 1500s for food supply. While exploring Florida, many escaped and multiplied across the southern states. The Texans look at hog hunting as a “win-win-win”—rid the ranch of pests, feel the thrill of the hunt…and fill the freezer with meat. 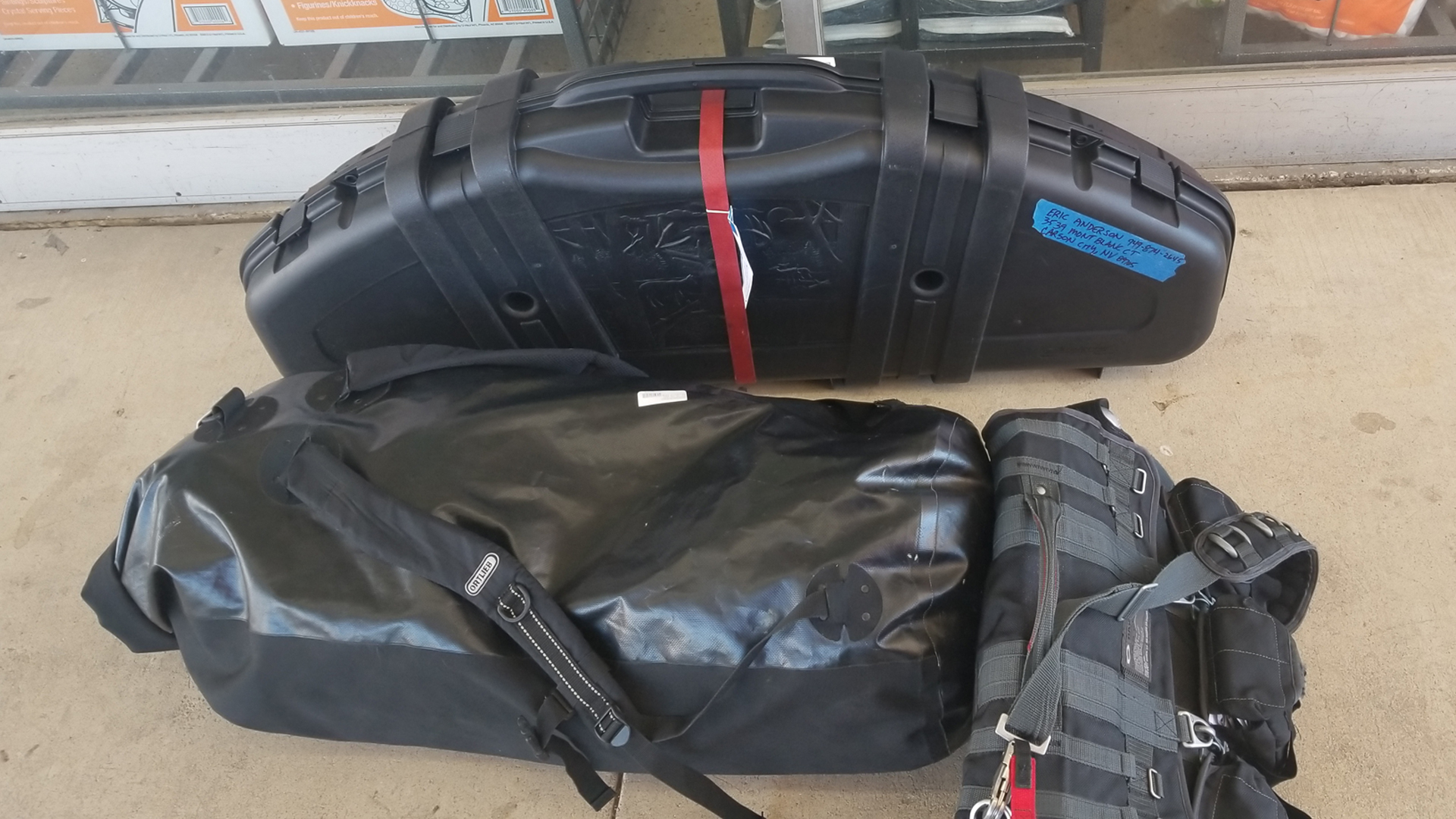 For this event, I practiced with my bow on a 25 to 40-yard range back home. Since we were scheduled for a night hunt, I brought along illuminated arrows (nocks) and newly sharpened broadhead tips.

As you can imagine, without light, everything changes at night. Before prowling though the meandering animal trails, you need to “nock” the arrow in the dark, without, of course, poking the guide in the rump with a sharp broadhead. A hog could come out of the bushes at any second, so be aware of EVERYTHING around you: wind direction, partner location, smells, humidity, emergency pistol access, moon shadows, foot placement, breathing, sounds. Be aware—super aware! These hogs have big tusks! 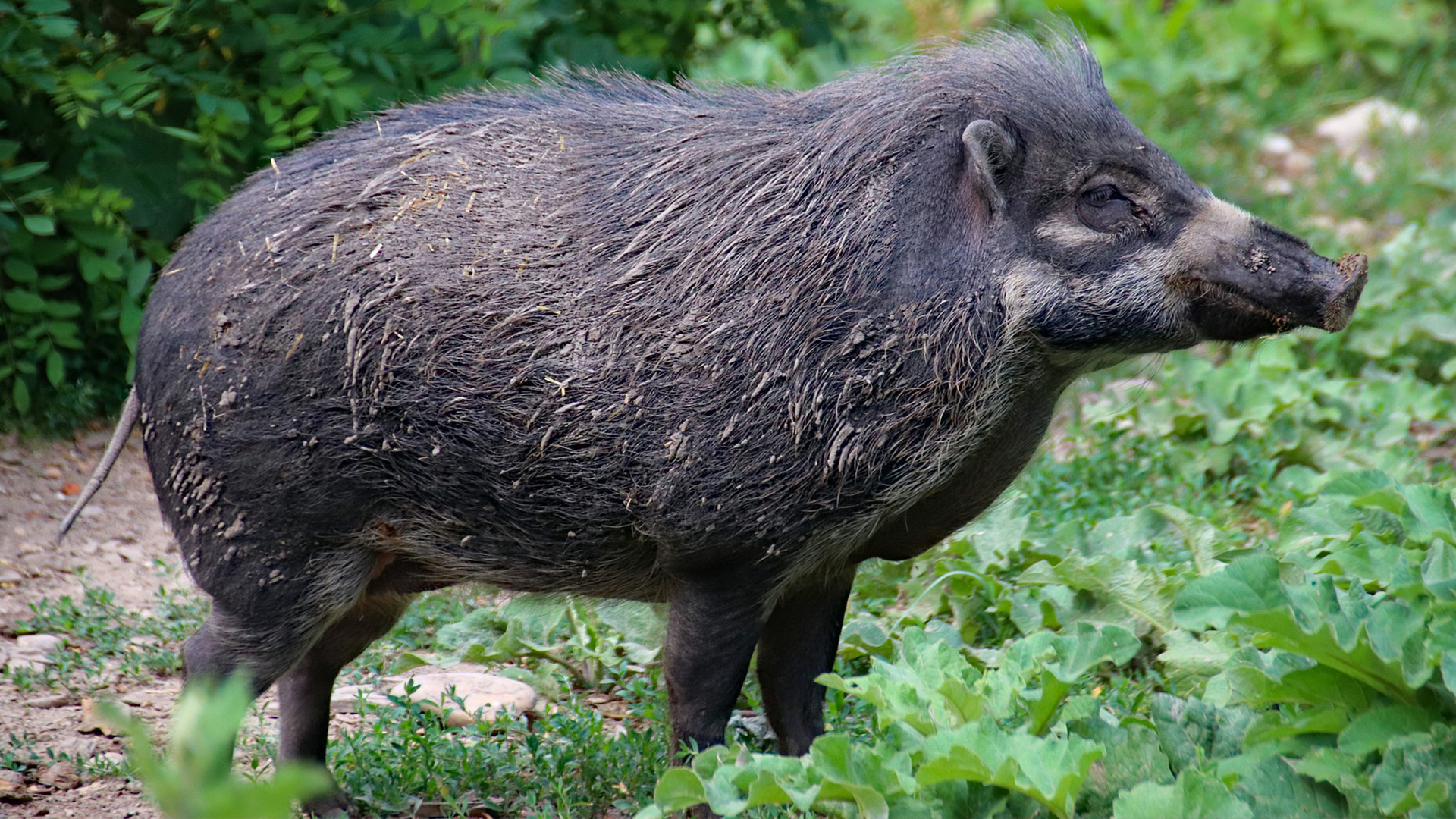 Lucky for me, I was picked up in a bush plane: a Super Cub with tundra tires, along with my gear, and flown into a ranch in Texas Hill Country to meet up with the group. Springtime in Texas was wonderful. There was Bluebell flower-filled fields and green grass everywhere. Two ROXORs awaited my landing in a grassy field. Time to roll…and set out the seed corn around the cattle ponds, or tanks, before sunset. Once night falls, we could be out there for 6 to 10 hours waiting. Fortunately, there was a secret, night-hunting weapon waiting for us… 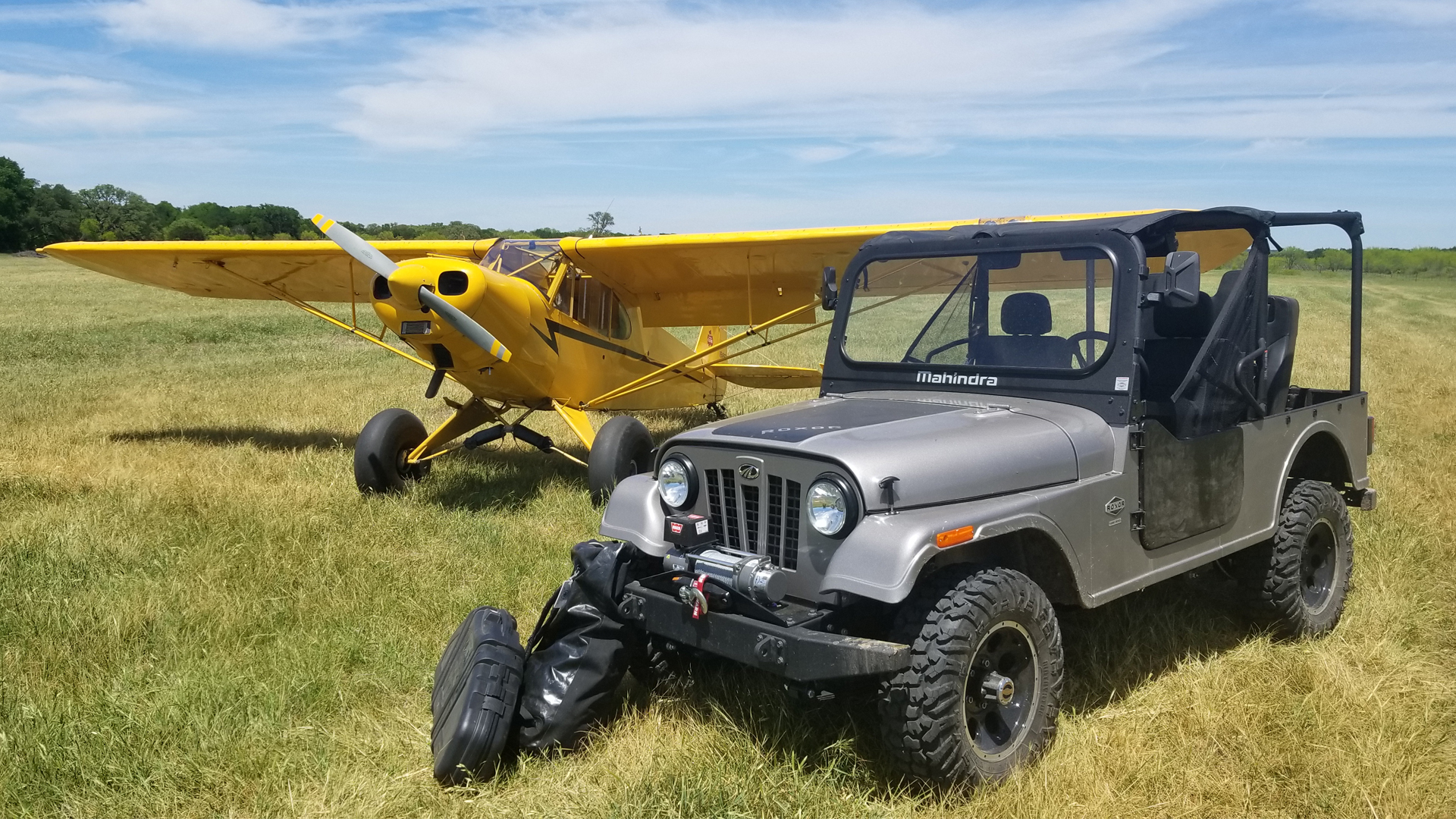 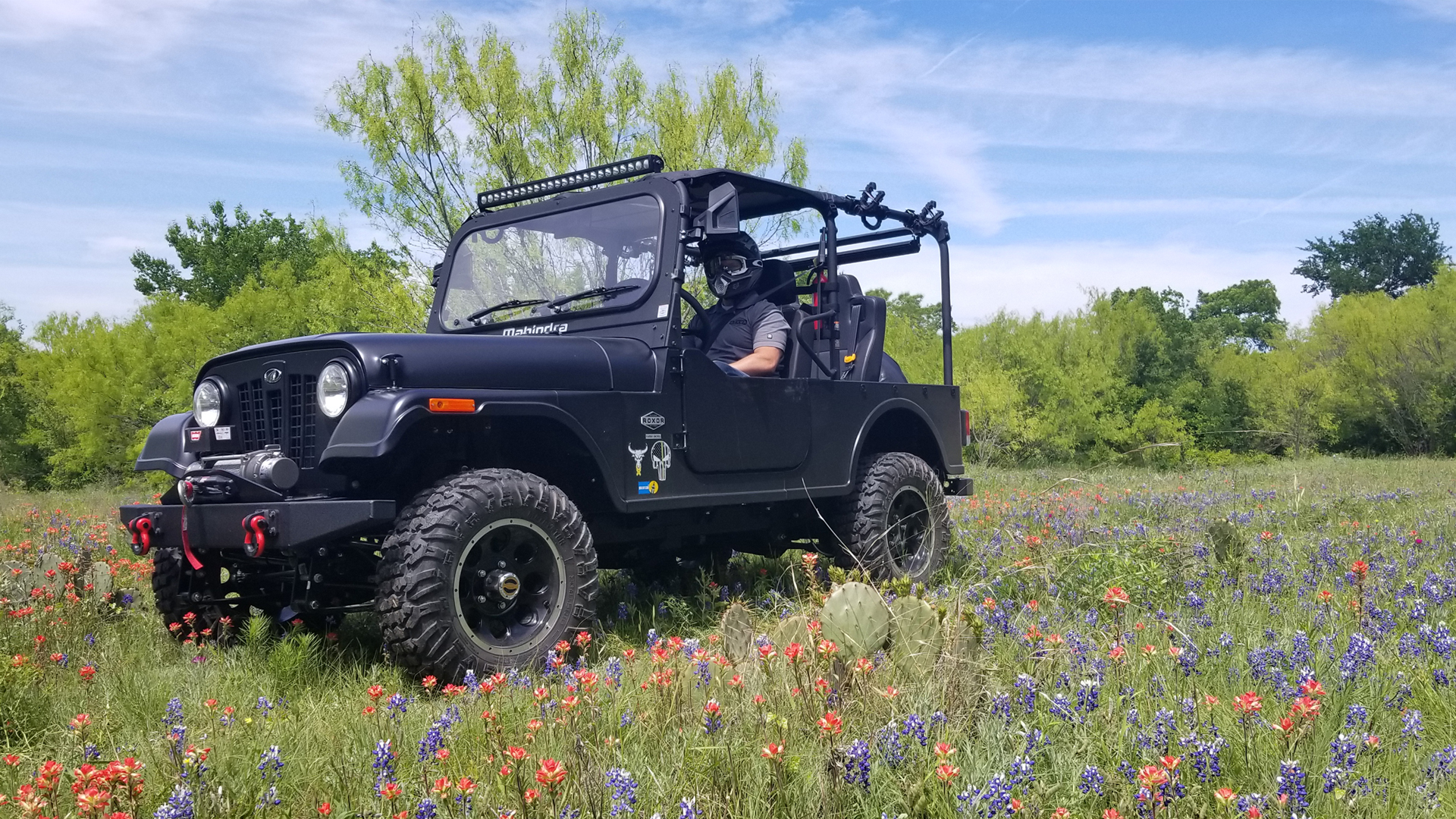 Slow Glow Hunting Lights provided a newfangled device on a 6’ tall tripod which allowed us to see the hogs in the dark around the baited cattle tanks. Once a heat source is detected, a pre-selected choice of red or green light comes on very slowly over a period of minutes—no sudden flashes to scare off the game. An attached game camera connected to our smart phones via an app informs us which tank has infra-red (warm blooded) “action” around it. The process almost sounded too easy, but we gave it a chance to see how they do it in Texas. 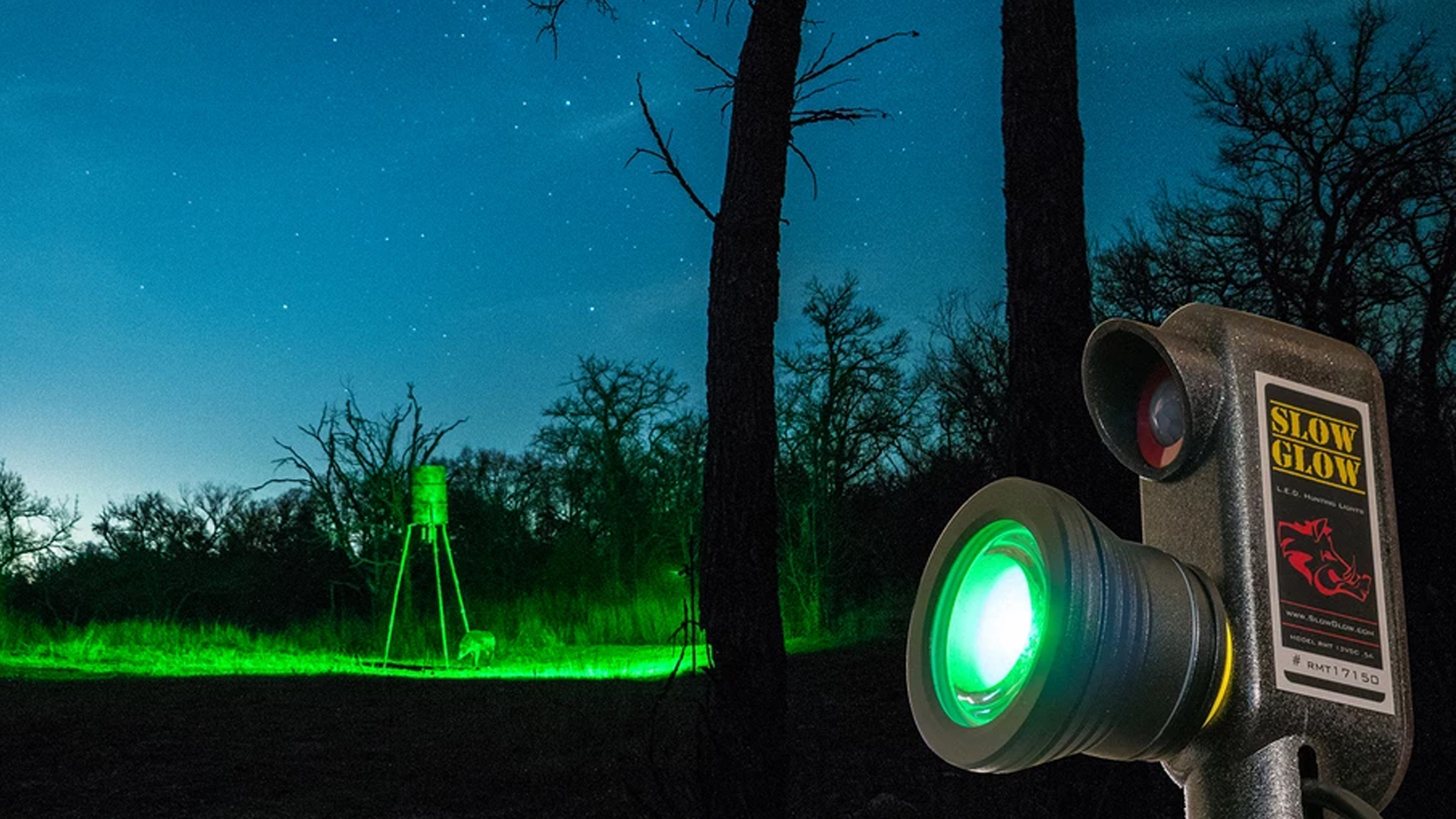 The ROXORs were loaded with seed corn, jackets, Slow Glow lights and, of course, a Yeti cooler filled with refreshments for the long night ahead. The weapon, a Caracal CAR816, attached to the ROXOR’s ROPS (Roll Over Protection System) using Kolpin Rhino grips. The ponds were baited, and Slow Glows were set up at each one by 4:30 PM. We headed to the ranch house for a quick dinner, along with a lesson on knife sharpening for the likely ceremonial butchering to take place around midnight.

At about 6:30 PM, just before sunset, we all “wheeled” out to a central position to all the tanks and sensors. The idea was to sit in lawn chairs (downwind) and watch the photographic “feed” transmitted to our smart phones from each of the 3 tanks. During the wait, we held quiet conversations near the ROXORs. The four of us had an absolute blast getting to know one another through whispers for fear of the hogs hearing us over 100 to 150 yards away. 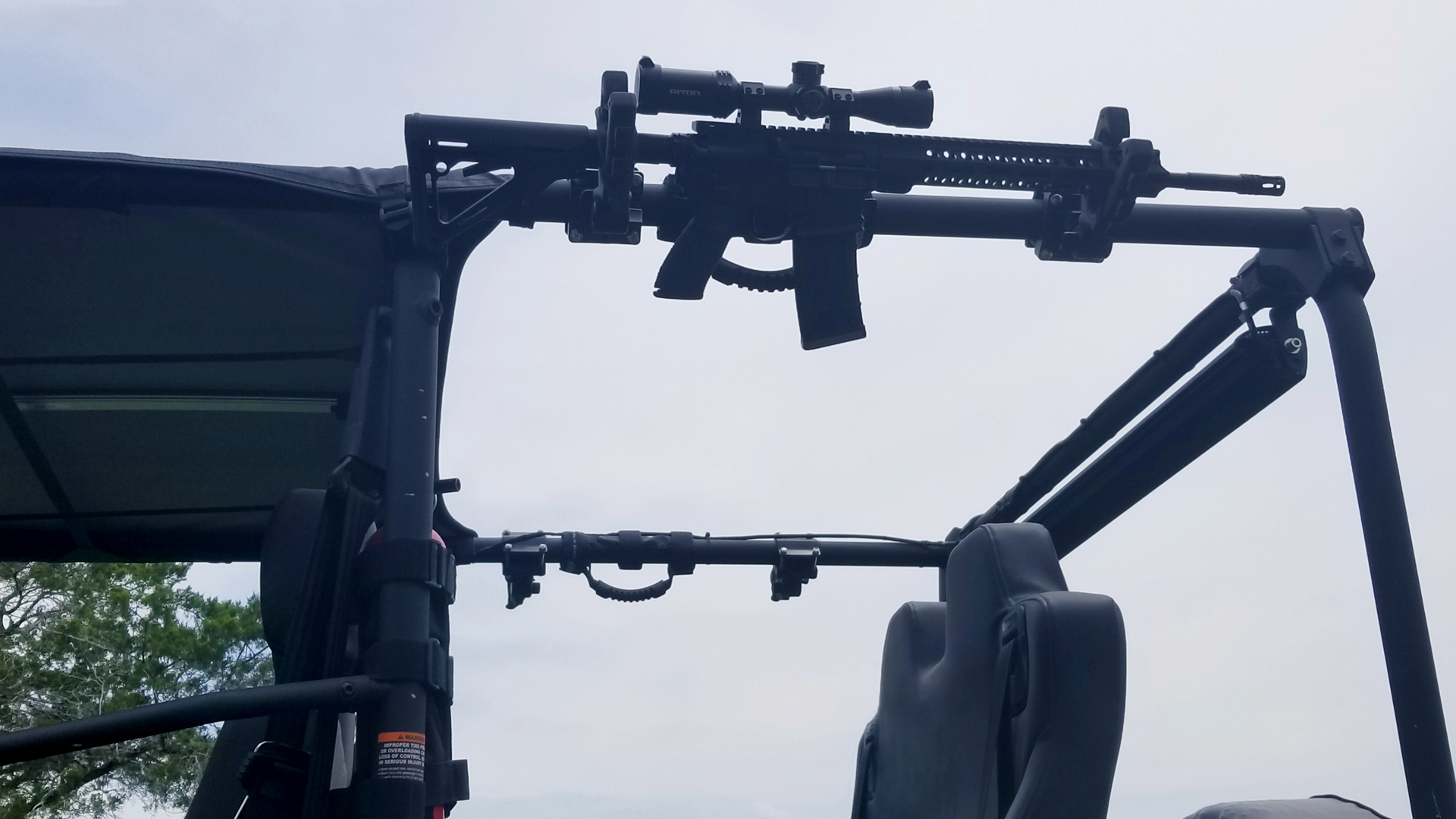 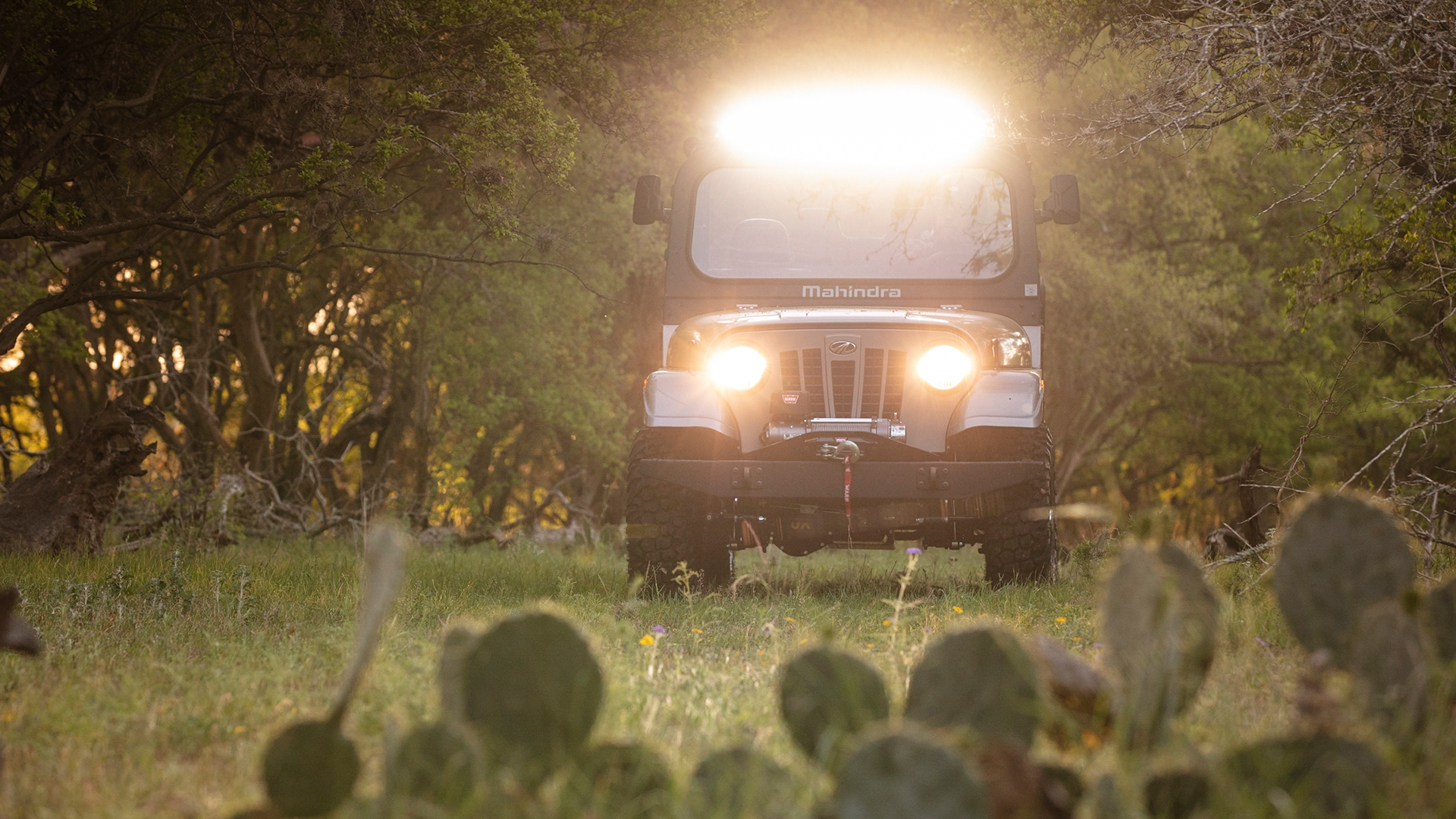 Boom! We had a “video hit” at tank 3. Hog action included a couple of large sows and some piglets in the low-res photo on the phone. Tom, the professional in the group, set off with the guide, Clint, to sneak up behind the group while the Slow Glow gradually began its growing luminosity tricks. By the time they reached tank 3, more hogs had arrived, and Tom picked his animal. The “bang” rang back to us up the hill. Suspecting a kill, we awaited direction via text to “bring the ROXOR” and pick up the animal.

Our plan worked perfectly, but we still needed to follow the blood trail using a blood tracking light to find the animal. Hogs are tough and can run 100 yards after taking a bullet in the chest. Pulling the 170 lbs. sow out of the bush in the dark was a real workout. Once we were back to the ROXOR, it hauled the beast the rest of the way to the ranch house. Thanks for that torquey, turbo-diesel motor and accessory mounted KC lightbar—the combo safely carried us back through the rivers, mud and rocks with ease. My freezer still has 4 months’ worth of meat in it. And, BTW, it’s not tough meat like so many people say. You just need to know how to cook it: slowly, very slowly. Now, my bow shot... 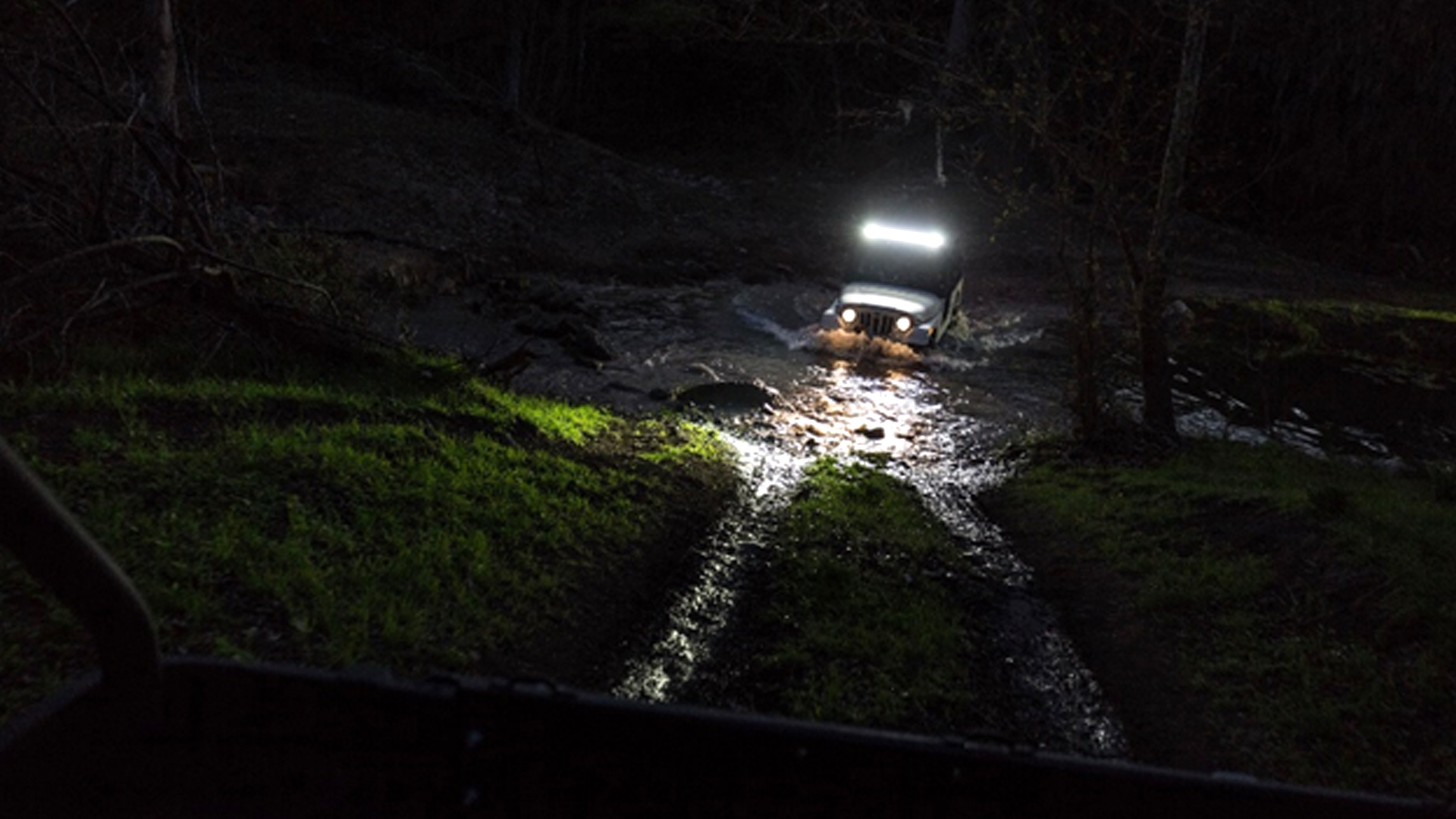 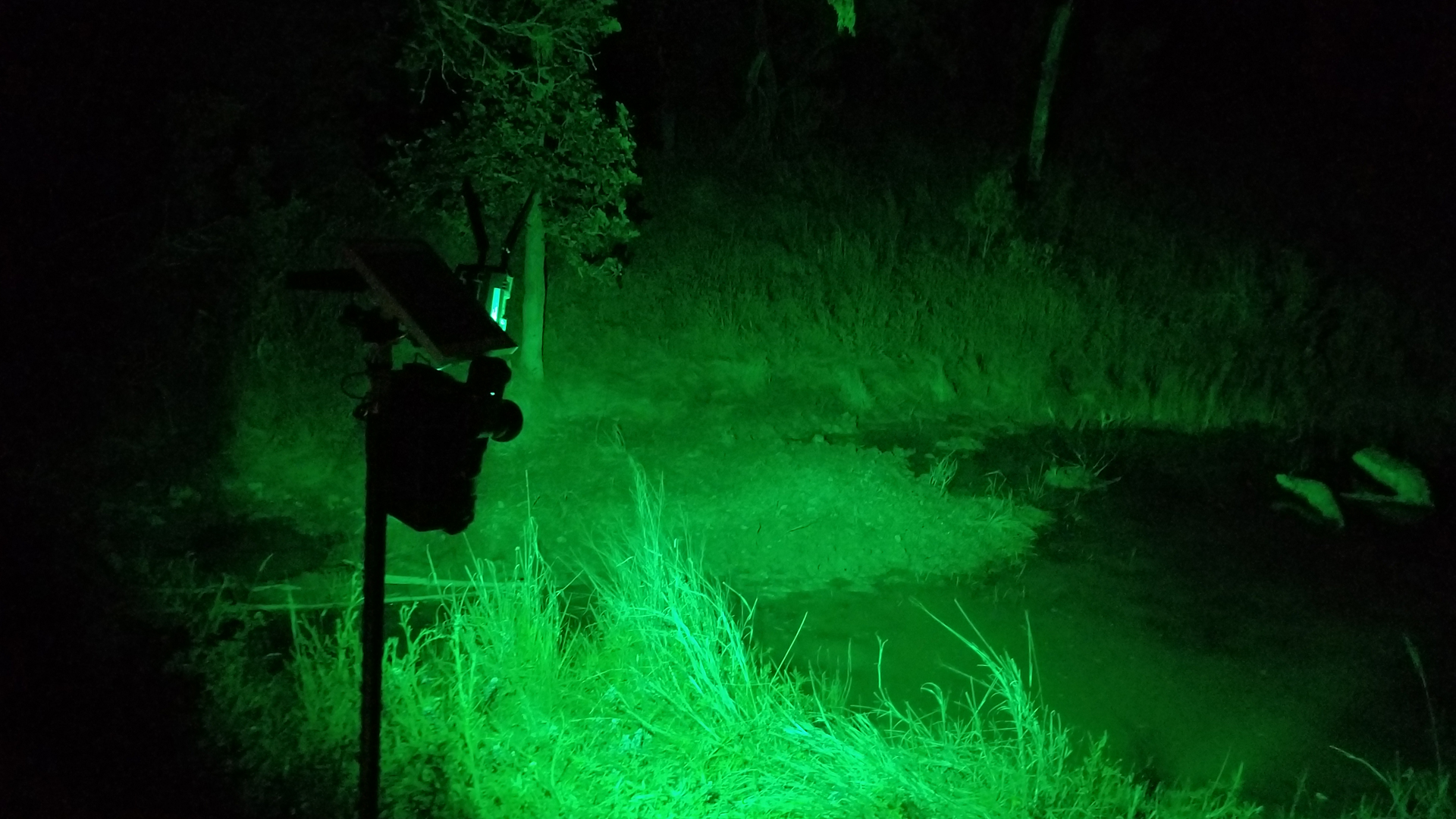 I’m a total newbie. I had never shot anything larger than a rabbit with a bow, but I was willing to see what it was like to go after a hog. We snuck up from behind the light and downwind. Suddenly, there was a HUGE hog only 11 yards from me. I had practiced at 25 to 40 yards. I took a deep breath and relaxed…pulled back and sighted on the animal, but out of amateur habit, my right eye picked the 40-yard sight. I had never practiced on anything this close or in the dark. Honestly, I didn’t even know how to sight on something directly in front of me… Whoosh! The game camera captured the photo below: the illuminated nock on my arrow directly across the back of the animal, so close it shaved off a few hairs. 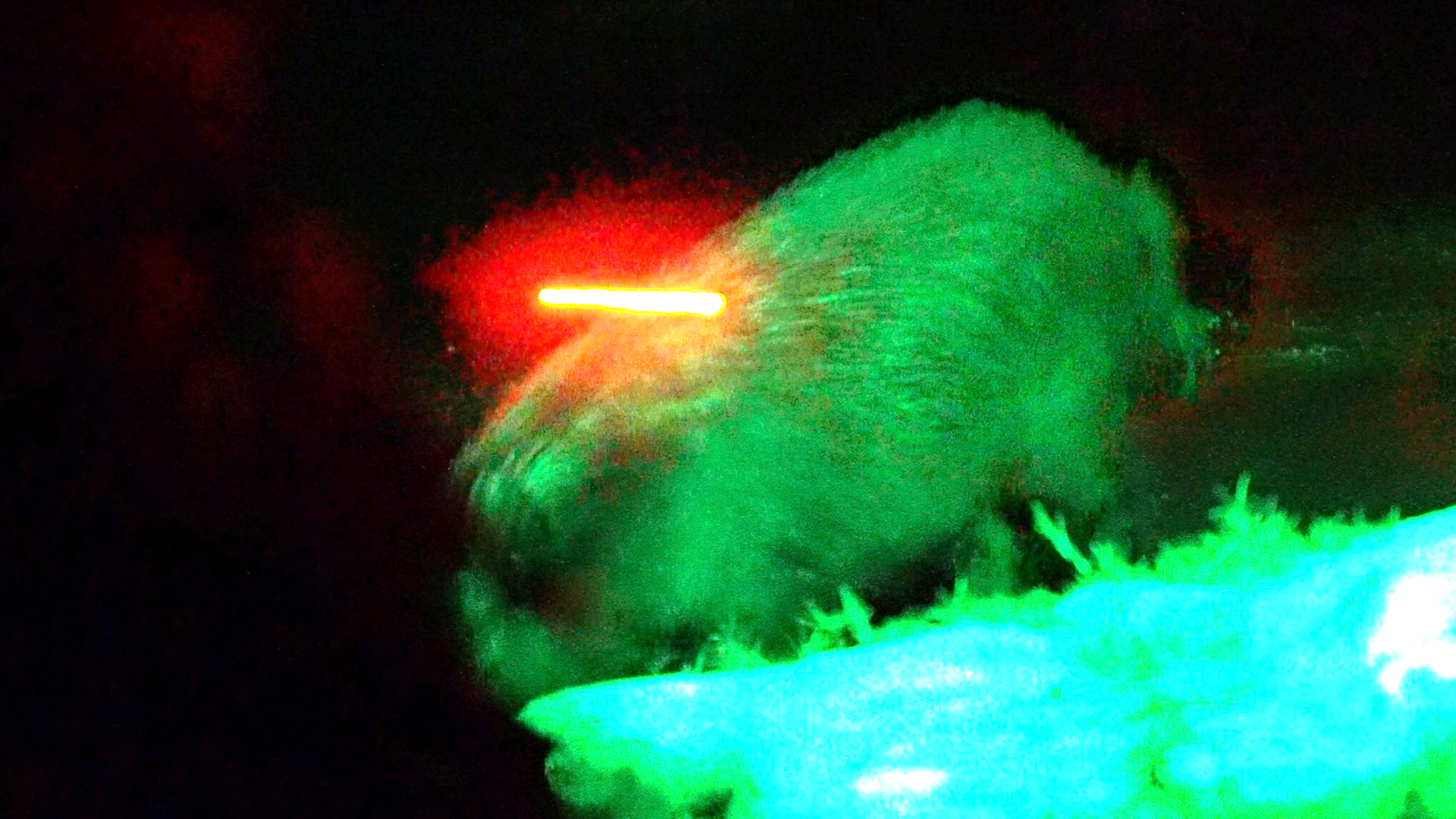 Yep! My guide was amazed I had missed, but I can assure you I won’t repeat that “sighting” mistake again. I loved the thrill, even if we weren’t hauling out a 180 lb. hog. It was late, bedtime for this guy… next time, I will be ready!!

ROUGHING IT ON THE RUBICON TRAIL